Albany is the capital city of New York State. The city is located on the banks of Hudson River. Albany is a fantastic tourism destination offering valuable experience for travelers and a sustainable and vibrant living for the residents. The city boasts a rich 300-year history, flourishing technology parks, and a thriving artistic community and is the home of Albany International Airport.

Entertainment and Nightlife in Albany, NY 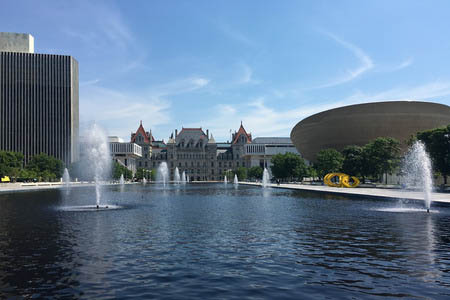 Albany City is at the center of three vibrant and economically promising cities of New York, Montreal, and Boston. Hence, its geographical situation makes it a convenient stop for national and international tourists.

Places such as the Palace Theater and The Egg provide huge forums for a musical, spoken word and theater performances for touring artists. There is also the TU Centre, which serves as Albany's largest musical location for prominent bands. The Center hosts sporting events, trade shows, and other large events.

Outdoor enthusiasts have everything to smile about when they visit Albany. The outdoor activities include skiing, hiking, and canoeing. The trout and small mouth fishing are one of the best in the country as well.

History lovers will also enjoy the colonial homes, museums, historical churches and they can tour 18th-century mansions such as the Schuyler. The building is an excellent symbol of the perfect pre-Revolutionary architecture. Tourists can also tour the New York State Capitol building, New York State Museum, and the Washington Park.

The city has a rich history, which consists of legendary, haunting, and eerie stories. The Graceland Cemetery is one such example, with an old urban legend of Hattie the Hitchhiker. Legend has it that a man once talked to a dead girl.

The legend of the Ten Broeck Mansion is an interesting read too. Legend has it that a man with a Billy goat beard haunts the mansion. He is upset because his portrait no longer hangs in the Daughters of the American Revolution Room.

Another favorite location is the NYS Capitol Building believed to be a haunted structure. The building is usually at its busiest in October because Ghost Tours takes place during this month. People travel from far to come and listen to the story about the spectacular Building. They believe that a night watchman known as Sam, who died during a fire accident haunts the building.

Albany is often called New York's Tech Valley because it is home to some of the biggest businesses in the country. Companies such as Samsung, IBM, and Global foundries have found a perfect environment for businesses in Albany.

Aside from businesses, Albany is also the hub of New York City's politics, and as such, a number of political and nonprofit organizations have set up offices in the city. In addition to government and technology, academic institutions have also found a home in Albany.

They include Albany Medical College, SUNY Albany, College of Saint Rose, Skidmore College, Sage College, Rensselaer Polytechnic Institute and much more. All these institutions meet the demand for education for residents in the area.

All these institutions lay a perfect foundation for a thriving economy since they provide the man power in sectors such as hospitality, finance, communication and other businesses and industries.